As far as historic importance is concerned, the title of this story is incorrect. It rather refers to the amount of tourists and visitors who bother to dispense with the trodden tourist path, neglect the ‘must see’ of Turkish historical sites and make judgments of their own. Just as I have done and was rewarded with a fantastic experience.

Miletos is situated approx. 60km west of the Turkish town of SÃ¶ke in West Anatolia near the Aegean Sea. Ephesus, Kusadsi and even Izmir are all not far away. I spend several months a year in Didim, which is half way between Izmir and Bodrum and went to visit Miletos coming from the Didyma oracle, passing through a lovely little village by the name of AkkÃ¶y and then turning off towards Miletos. 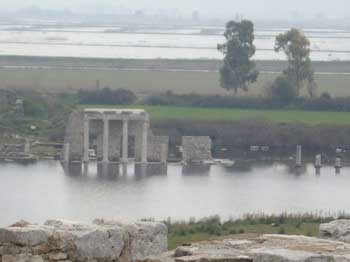 It’s of course off season now, which means it’s quite cold, a lot of rain, but warming sunshine in between which accounts for a lot of ground fog. The first thing which magically rose out of the morning mist when approaching the ancient site of Miletos was the 40 steps mosque. The entrance to the site as such is hardly marked, all of a sudden, you are just there. No tourist buses, no guided tours, an entire site all to yourself to climb around in and dream to your heart’s content. And, it’s the same in the tourist season as well. No tours to Miletos are offered anywhere as far as I could see and if you mention the place to other foreigners most of them stare back blankly or mutter, “Never heard of the place.”

Miletos was one of the five Ionina settlements along the Aegean coast and has seen Greek, Roman, Persian and Ottoman occupation. It was a far more important center than Ephesus ever was, with four ports, now all silted and away from the sea. An impressive amphitheatre is left, as well as good parts of the Agora, the baths and temple structures. Apart from its political and commercial importance, Miletos is remarkable because it was the first ancient city constructed on a grit pattern. It’s also home to the famous mathematician Thales and was connected by a sacred road to the Oracle at Didyma. 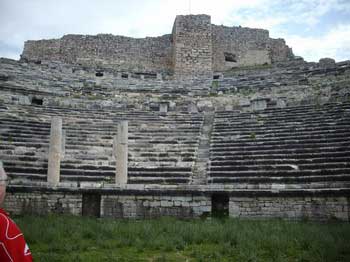 I climbed all the ‘bleachers’ of the amphitheatre, down the other side, along the quite well preserved city wall and looked across to the baths and temples, as far as they are still standing. Due to the previous rainfalls, the foundations rose out of the water and with the faint sun behind them, it looked to me as if I had found Atlantis. The only signs of modern day life are a small straw covered hut which sells freshly squeezed orange and pomegranate juice (both fruit in season now) and two or three little stalls selling the usual tourist junk, just on the off chance that a stray tourist might happen by. They do too, the insiders, the travelers ‘in the know.’