This is the scene: It is a beautiful sunny day. My daughter looks up at me and smiles a big, toothy grin. We are petting a baby sea turtle held by an intern-biologist at Sea Life Park on Oahu. We can hear the crashing waves of the ocean and children whispering questions about turtles to the biologist.

Sea Life Park is like a child-sized version of Sea World in San Diego- in a good way. The attractions are intimate; very high quality but so close you can touch it- literally. 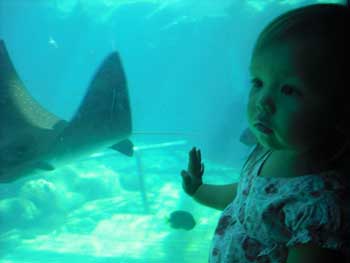 Upon entrance, families walk down a winding walkway that circles a gigantic (3 storey high?) Hawaiian Reef Aquarium that is full of swooping, graceful rays, sharks, sea turtles and many varieties of fish. This attraction alone is enough to interest most kids for 40 minutes or more. The view is different from every angle, so it is as if you see many different ocean scenes as you spiral toward the bottom oft the tank at ground level. Every couple hours a biologist in full scuba gear feeds the rays chunks of fish and something that looks like dog kibble to the schools of fish. There is also a tank janitorial staff, that swim around cleaning the inside of the glass in full scuba gear. Both the biologist and the tank-cleaner cause squeals of excitement from the younger park visitors. While watching the biologist hand-feed rays that measured over 5 feet in width, I wondered "how come my high school counselor never mentioned this to me as a career choice?"

The main attractions are the huge Hawaiian Reef Aquarium, the Sea Lion Show, the penguins, the rays, the Dolphin Cove Show, the seals, the open-air Hawaiian Ocean Theatre and the sea turtles. Kids can actually feed adult giant sea turtles broccoli and celery- getting within inches of the huge, beautiful creatures. The dolphin show is just like the shows at Marine World or Sea World. High jumping dolphins and their trainers do amazing tricks to delight the crowd. This is the only attraction that is somewhat impersonal- meaning you don't get to go up and touch the dolphins unless you pay extra to have a "dolphin experience" where you are in the water with them. At all the other attractions families get to be very close to the animals and speak to the trainers and biologists. There is also a neat playground and picnic space called Pirate's Cove. There is an elaborate obstacle-course type of play area for the big kids and a little jungle-gym for younger kids. Families can buy food there or eat lunches brought from home in the shade. 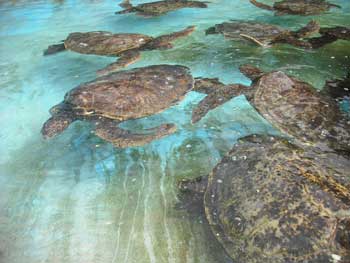 Sea Life Park happens to be one of the picturesque locations where one of my favorite movies "50 First Dates" with Drew Barrymore and Adam Sandler was filmed. I think the walrus was brought in for the film, but otherwise, the "set" looks just like it did in the movie. Sea Life Park is on the Southeast corner of the island of Oahu- right across from Makapu'u beach. The ocean is crystal blue and two cute islands are right off shore. From the park you have a nice view of Makapu'u point and Makapu'u Lighthouse. The park itself is clean and small. It is uncrowded even on the weekends. I also like the fact that they have impressive local conservation and education programs. The park opens at 10am but I would suggest getting there a little early or a little late as at 10am exactly there is a half-hour line at the ticket counter.

From Waikiki, take H1 until it becomes Highway 72. Continue past Hawaii Kai, Haunama Bay and the Blow Hole. Just past Makapu'u Point, turn Left into the parking lot of Sea Life Park. Parking is a couple dollars. 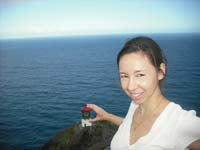 Our Lady of Lebanon, Harissa