The Bridge Between Croatia and Bosnia-Herzegovina

Stands selling oranges frequented the E73 road from Dubrovnik to Mostar. The border crossing from Croatia to Bosnia-Herzegovina was more a formality than anything else. After Nebo, my driver, passed back my passports, he declared that hostilities still lurked underneath the surface

"Remember," he said, "Mostar was shelled by both the Serbs and the Croats."

As I approached the town, minarets started to appear. And then, Mostar's most recognized symbol, the bridge, (Stari Most) came into full view, its fresh stone contrasting with the nearby ancient buildings. (Croat artillery destroyed the 427-year-old structure in 1993; it was restored in 2004 and is now a UNESCO World Heritage Site.) 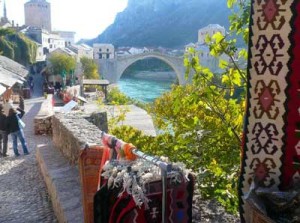 Down below the Neretva River flowed as it has for centuries, remarkably clear and unpolluted. Nebo parked the van on the Christian side of Mostar, next to a Catholic church. "Now, I must warn you, "He said, "The gypsies are notorious for begging. Do not give them anything; otherwise they'll all be after you."

Sure enough, even before opening the door, a woman with straggly black hair and missing teeth held out her hand. In her arm was a baby. Nebo explained they believe carrying a baby will get them more money. The same baby reappeared a couple of hours later, in the arms of another woman.

During the short stroll to the bridge, Nebo told me that because he has a Serbian last name, he was in a no-man's land. Employment was near impossible in both Croatia and Bosnia-Herzegovina. He and his fiancÃ©e were planning on immigrating to Australia because he was being shut out of the job market.

"Neighbors used to have coffee together before the war, now they have no contact. We got our independence, but lost everything else because prices have gone up and wages have stayed the same".

As I approached the bridge, a holiday atmosphere took over. People were strolling or, just standing and looking at the Neretva rushing below. As is common in Eastern European countries, men were standing in groups, smoking and passing the time of day.

As I exited the bridge, I found myself on the Muslim side of Mostar. Surprisingly, I did not see one woman wearing a headscarf, although a few men wore knit kufis (caps). Here, people speak Bosnian, while on the Christian side, Croatian is spoken. The river is the boundary between the two ethnicities. 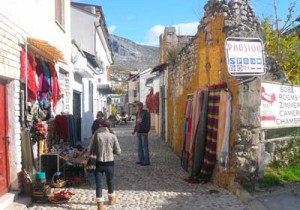 Kujundziluk Street, the main shopping street, was lined with shops selling embroidered goods, caftans, and the biggest array of NIKE shoes I have ever seen. Even old military memorabilia was for sale. The owners were standing outside with hands clasped behind their backs, while behind them were buildings still peppered by bullet holes. A group of old women, sitting on stools embroidering tablecloths, acknowledged us with a small wave.

As I strolled along this totally pedestrian cobblestone street, I passed people just sitting outside a cafÃ© drinking beer, or strong Turkish coffee. In contrast to neighboring Croatia's red tile roofs, the roofs in Mostar were gray slate slabs.

The inventory of wares were more mid-Eastern than European. Racks of decorated pipes, handmade jewelry and paintings of the bridge graced almost every shop entrance. The Turkish influence, dating from Turkish rule, was everywhere. Prices varied from store to store, so I comparison shopped. It appeared the best prices were places where the artist was in residence.

The Carpet Gallery sign peered out at me from a collection of woven Turkish carpets. Next to, the Carpet Gallery, a large ceramic cook was holding up a frying pan with "Today's Menu" chalked upon it. Euros and the Bosnian KM are widely accepted in shops and restaurants as is the Croatian kuna. I found euros to be the best.

After two blocks, I reached the main mosque where visitors are allowed inside. The familiar international red circle with a line through it (telling visitors what they must not do) is front and center. Included were no: speaking, immodest dress, kissing, or alcohol. I stepped into the quiet of the courtyard with its six-sided fountain; pilgrims use the water for cleansing before entering the mosque. 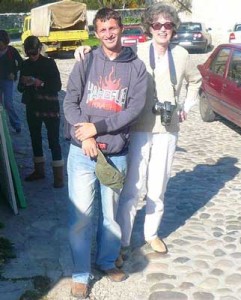 Just across the street from the mosque, and in time for lunch, I found the Europa CafÃ©. As with most cafes on the street, tables were set inside and out. I tried one of the region's favorites, Civapcici, a kind of 'brown and serve' sausage made of ground meat and generous helpings of garlic. The accompanying cucumber yogurt sauce was delicious.

On my back, across the bridge to the van, the minaret started calling the faithful to prayer. Although I had traveled only a short distance from Dubrovnik, I had been transported to a different world. And, as Nebo maneuvered his van through the outskirts of Mostar, I noticed a direction sign pointing to the EU barracks reminding me that there is still a military presence.

IF YOU GO:
There are many buses a day to Mostar from Sarajevo, Dubrovnik, and Split. All take about 3 hours. Visitors can also rent a van and driver as I did. Mostar makes a great day trip from either Dubrovnik or Split. There are also buses to and from PloÄe on the Croatian coast. Trains from Sarajevo to Mostar take about 90 minutes

Note: Medugorje, the Catholic shrine, is about a half- hour drive from Mostar.