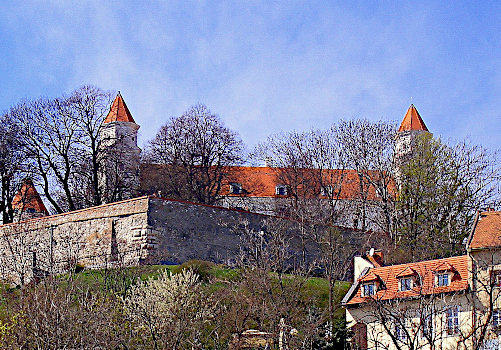 I'm lucky enough to meet a few locals in Bratislava. The first is a couple who accept my request for accommodation on Couchsurfing.com. Kindly taking me out walking both nights I'm there, the first place these couchsurfers lead me is to Bratislava’s cosy Old Town. Dating back to the fourteenth century, it retains one of its original gates and the fountain that began supplying water to the town in 1572. Notable buildings include the 1552 Clock Tower, the nineteenth century Palugyayov Palac, and the early twentieth century Art Noveau and somewhat Gaudi-looking “Blue Church.”

In 1997, the Old Town acquired a number of extremely personable bronze statues: a sewer worker, two girl skateboarders hanging out, and a local legend named Schaner Naci who used to wander the streets in “over the top” clothing, kindly greeting everyone he met. For the couchsurfers, the statues hold huge importance, symbolizing an end to Communism and the beginning of a modern European city.

Next, they take me up the hill to ninth century 'Bratislava Castle and its stunning Baroque-era garden overlooking the Danube River. As we take in the city views, one of the couchsurfers points to Bratislava'[s biggest shopping mall and says “Capitalism.” He then points to the bridge resembling a UFO and says “Communism.” I appreciate his comment immensely!

The structure on top of the bridge — now a restaurant offering panoramic views of the city — really does look like a UFO! The product of 1960s futuristic design, Most (bridge) Slovenskaho Narodnaho Povstania (Most SNP for short) honors Slovakia’s 1944 resistance against Nazi forces.

Just beyond it stands one of the densest estates of grey, uniform, concrete apartments ever produced by the Soviet Union. This I visit the following day. With over 100,000 residents, the suburb, 'PetrÅ¾alka,' was established in the 1970s to house workers of a nearby refinery.

The strange designs continued into 1980, as evidenced by the “so unattractive I find myself drawn to it” fountain, four minutes walk away at “Namestie Slobody” or Freedom Square. Previously taking the name of the first president of Communist Czechoslovakia, the square was renamed after mass demonstrations here and in Prague overthrew the Communist government in 1989.

The grandest Soviet architecture in Bratislava, however, is a pleasant thirty-minute walk or bus-ride from the city center, fifty meters up a hill high enough to overlook Bratislava Castle. At the “Slava­n Memorial and Military Cemetery,” statues of soldiers hugging and girls with victory ribbons join a much taller Obelisk. On top of this, a soldier raises the flag that liberated Slovakia in World War II.

Walking out to this cemetery, I meet another local — the coordinator of Amnesty International whose office I chance upon and peek into. She educates me about the team, the progress Slovakia has made in respect to human rights, and the work still ahead concerning discrimination towards the Roma minority and corruption in politics. I’m also lucky to be given campaign posters written in Slovak (talk about unique souvenir!) and to be alerted to the “Gate to Freedom Memorial” commemorating the four hundred people killed between 1945 and 1989 trying to cross the border of Communist Czechoslovakia into Austria.

The memorial is situated next to 8th century “Devin Castle,” the oldest remains of Slavic settlement in Slovakia (20 minutes from the city center, take Bus 29 from the station under the “UFO Bridge”).

That night the couchsurfers introduce me to a simple yet tasty meal I encounter again and again in Eastern Europe: bread topped with cream cheese, peppers, cucumbers and tomato. We get talking about Slovakian culture. They tell me Slovakia is much more religious than the Czech Republic (A 2017 Pew Research Poll found only 29% of Czechs believe in God compared to 69% of Slovaks) and far less liberal regarding the usual range of issues (also evidenced in polls). Fascinating.

Lying underneath Brno’s grand Old Town is its most visited attraction: the “Labyrinth under the Vegetable Market,” a network of cellars that from the thirteenth century onward stored food, wine, and beer and even housed an alchemist’s laboratory.

What Brno is also famous for is being a center of 1920s functionalist architecture. Simple with clean-lines, the style is best represented by the mansion, “Tugendhat Villa,” now a World Heritage site (tickets must be purchased online, where you can also take a virtual tour!)

Last of all, Brno is where Gregor Johann Mendel discovered the concept of genetics "“ his workplace and home having since been turned into a museum. So too it is the birthplace of author, Milan Kundera, best known for his work The Unbearable Lightness of Being.

The famous Charles Bridge and the world’s largest castle (built around 880) make Prague look like the setting for a fairy-tale. Much to my surprise, the castle contains many unlikely attractions, including an excellent toy museum with a disproportionately large Barbie doll collection.

From childhood memories I move on to a museum about the works and life of another literature great, Prague resident Franz Kafka. The haunting atmosphere perfectly captures the mood of his novels and a life that ended far too soon. Kafka’s presence is also felt in the incredibly elegant and sophisticated 1902 era Cafe Louvre, which he frequented along with other intellectuals such as Albert Einstein. And he’s immortalized in two statues (one in the Jewish quarter, Duana­, 110 00 Star Masto and the other on Charvatova, 110 00 Nova Masto).

Likewise, Prague has put considerable effort into remembering Communist-era Czechoslovakia. At the base of a beautiful park and lookout called Petrin Hill stands the “Victims of Communism.” Seven bronze men, each with a different body part missing, symbolize the thousands killed and imprisoned.

Ten minutes walk from there is the brightly coloured mural and message-filled “John Lennon wall.” After Lennon’™s murder in 1980, Czechoslovakians illegally painted his image and Beatles lyrics all over the wall. The government would paint over it, only for the graffiti to reappear, again and again. What a backdrop for a photo!

Of all the memorials, the most interesting is the “Museum of Communism.” There’™s a recreated schoolroom, Party office, grocery store, and farm scene; sporting memorabilia; amusing propaganda posters against the US and Capitalism; and footage of an illegal seventies rock band and of the protests that ended Communism in 1989.

The interactive history lesson continues ten minutes walk away, deep below the city center. There I tour the nuclear bunker built for the protection of citizens during the Cold War. The guide, dressed in army uniform, directs us to radio control rooms, machines holding the bunker ready to go into lockdown, and tunnels and trapdoors to rooms where people would have stayed. I emerge concluding that there’s nothing like a bunker to make you realize the seriousness of nuclear war!

It’s all these experiences and the different character of the three cities that make visiting the region so intriguing. As an added bonus, Vienna is only an hour from Bratislava, and Budapest 2.5 hours, so it’s easy to combine with other trips too.

It’s easy to get to the Czech Republic from Bratislava — here’s how:

Take a train to the second biggest city in the Czech Republic, Brno, takes a mere 1hr 30 mins (1hr 45 by bus).
Take a train from Bratislava to Prague takes only 4 hours (4hrs 30 by bus).

Labyrinth under the Vegetable Market: www.gotobrno.cz/en/place/labyrinth-under-the-vegetable-market-labyrint-pod-zelnym-trhem/

Taken for a Ride