The Empire of the Dead

'Stop, here is the Empire of the Dead'. A sign warns as you enter the chamber. If you dare pass, as your eyes adjust to the light you might notice the rippling of the walls to the left and right. It is only as you become fully used to the dim light do you notice the skulls imbedded in the stone work, and that the stone work is not stone at all, but hundreds upon hundreds of bones, piled one on top of another, reaching almost to eye level. Behind these bones more remains are evident: pieces of ribs and hips, shattered skulls and bones so numerous and differing one cannot even begin to piece together a complete skeleton. How many soles rest within in view, dozens, hundreds, thousands? The gruesome picture continues into the dark ahead…. 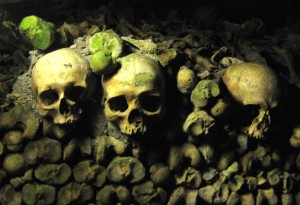 As real and disturbing as this sight is, this is not some hidden graveyard or an adventure just for the perverse, but a tourist attraction within eyeshot of the Eiffel Tower. A vast network of subterranean tunnels and caverns, originally dug by the Romans, have become the final resting place of around six million Parisians and a brief visit for around 250,000 tourists each year.

An exploration of this kingdom of the dead starts in an unassuming entrance on the outskirts of the city at Denfert Rochereau – a busy metro stop, where a deep, spiral staircase leads into long and narrow tunnels. The Ossuary, the house of bones begins almost a kilometre into this walk, and for those that think twice, there is little escape: onward is the only way.

Dozens of kilometres of tunnels are lined with bones, some restored to how they were originally posed – whether it be skull and crossbones or a twisting arrangement of thigh bones, it is intriguing as is as repugnant. While visitors walk though neat corridors lined with tidy stacks, padlocked, and often welded-shut, gates block the way to other passageways, where bodies lie fallen and scattered all around. Only the darkness ends the lines of bones, the real end to this story is farther than one can see.

While most of these bodies were originally laid to rest in Parisian graveyards, disease, revolt, revolutions and riot lead to overcrowding, open and insufficient burials resulted in the spread of diseases and with land scarce the remains of some of a generation of Parisians were un-ceremonially, but none the less artistically, piled into the tunnels far below the streets.

Some of Paris's greatest names Rablais, Demoulins, Robespierre and Danton, to name but a few, lie broken and unmarked among the ossuary's tunnels; evidence of the city's history on clear display. Over 20,000 victims of revolution's guillotines, along with victims of age, crime, disease and famine lie entwined together for as long as their bones may last: not a single bone marked, not a single skeleton lies in tact.