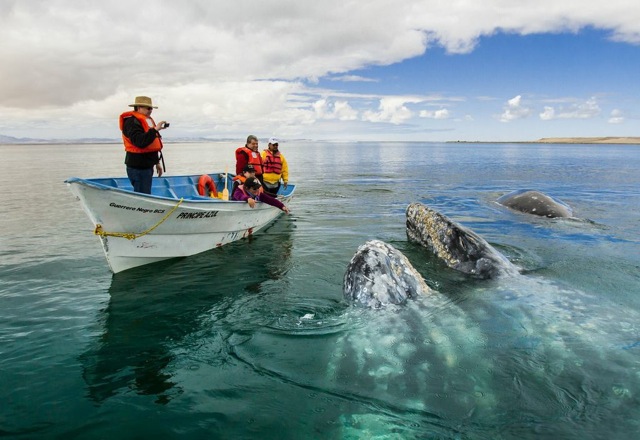 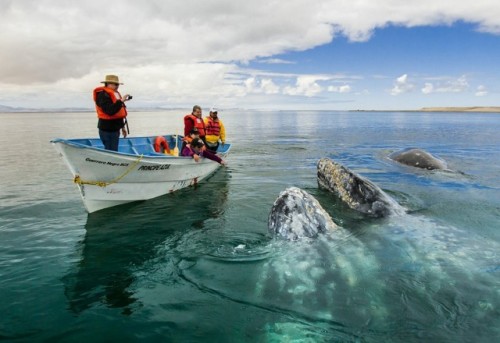 La Paz’s Winter Visitors Have a Whale of a Time: Locals and tourists alike welcome the area’s most celebrated winter guests

Staying close to the Pacific coastline and with expectant mothers in the lead, an estimated 18,000 California gray whales, which measure up to 50 feet long and weigh as much as 35 tons, swim approximately 5,000 miles from the Artic and North Atlantic to either mate or give birth in the shallow lagoons of Magdalena Bay.

The extremely high salinity of these bodies of water makes young calves more buoyant and keeps them warm until they have developed a layer of protective blubber. Males head back north first, with females following once their calves swim well enough and gain sufficient weight. The round trip is believed to be the longest migration undertaken by any mammal.

Other species of whales, including humpback, bryde, sei, sperm, finback, pilot and minke whales as well as orcas, also congregate either near the grays or in the Sea of Cortez on Baja’s eastern flank, primarily near San Ignacio, Vizcaino Preserve and Laguna Ojo de Liebre in Mulege.

La Paz is a favorite point of departure to the most popular whale-watching destinations given its wide variety of trip operators and options and the lack of hotels near the lagoons. La Paz even celebrates its most colossal visitors’ annual arrival with a Gray Whale Festival taking place in early February and includes concerts, traditional cuisine and whale-watching expeditions in a festive atmosphere that can only be enjoyed in Mexico.

These magnificent cetaceans can be observed up close in their natural habitat in several ways. Tourists can choose half- or full-day trips on small boats called pangas, longer excursions from base camps and even overnight cruises. As many as 300 whales can be present on any given day during the mating and calving season. The sweet-tempered and curious leviathans often approach boats to welcome a friendly rub from humans.

Sea Quest Expeditions: offers sea-kayaking tours to Magdalena Bayranging from 4 to 6 days from a basecamp well suited for families.

Fun Baja (www.funbaja.com) offers one- and two- day whale-watching adventures on the Sea of Cortez by certified guides who operate motorized boats that take guests to sites with consistent activity.

The Cortez Club: offers daily excursions to Magdalena Bay that include transportation, tour guides and a seafood lunch.

Baja Tours: offers one- and two-day whale-watching tours to Magdalena Bay, with the latter excursion including an overnight stay in Puerto Lopez Mateos.

Hunted for their oils, blubber and other valuable products, gray whales were once victims of massive slaughters in the 1800s and early 20th century. The hunting continued until the numbers were reduced to only a few hundred, and the whales were subsequently placed on the endangered species list. But thanks to an international protection agreement made among several countries in the 1940s, the whales’ numbers have grown at an incredible rate. Today, more than 20,000 gray whales exist and although still protected, they were removed from the endangered species list in 1975.

ABOUT LA PAZ:
La Paz, whose name means “peace,” combines an authentic, small-town Mexican feel with the tourism services savvy travelers expect. Hidden away on the southern tip of the Baja Peninsula approximately 135 miles north of Cabo San Lucas on the Sea of Cortez, the city is a gateway to one of the world’s most unique and bountiful ecosystems, declared a World Heritage Site and dubbed by French marine biologist Jacques Cousteau the aquarium of the world. The city’s rich cultural history, striking natural wonders, white sand beaches, turquoise waters and world-class sports fishing have made it a magnet for romantics seeking a secluded getaway, outdoor enthusiasts looking for adventure and families in search of a kid-friendly place to explore.Outside selected La Paz as best weekend escape of 2013 and by Beautiful Bride as one of the top six honeymoon destinations for San Diegans. Direct flights are available from Los Angeles on Aeromexico, while a new four-lane highway makes the drive from Cabo San Lucas only 90 minutes.

Virgin Atlantic to Kenya in 2007