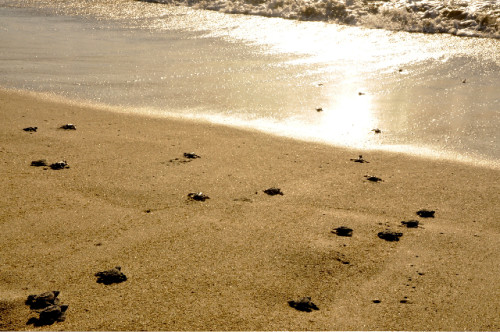 The Lagoons of Chacahua Natural Park is a paradise on Earth, hidden in the recesses of the pacific coast of southeast Mexico. In order to get there, we journey west for 50 kilometers from the famous surf spot of Puerto Escondido down Highway 200, to the unassuming town of Zapotalito, where we must then take a boat across the lagoon and into the reserve. The boat ride lasts for about ten minutes, and once inside the reserve, another ride in the back of a truck for about ten kilometers takes us to the small fishing town of Chacahua, where only a handful of local families reside in the relative tranquility and seclusion of this natural wonder.

is one of five towns that exist within the natural reserve, enclosed between the bay of the Pacific Ocean on one side and the five lagoons of Chacahua, Mexico that surround it on the other. Arriving in town, we are welcomed by a local, Don Carlos Contreras, who owns a few beach bungalows and a small restaurant which are entirely family-run.

Don Carlos is a well-known local character. He is a public representative of Chacahua, Mexico, is involved in several conservation projects around the reserve, owns the guesthouse and, Chacahua being absolutely devoid of any sort of police force, acts as the watchman in case things get out of hand which, he admits, is a rare occurrence and consists mostly of dealing with the occasional drunk.

Chacahua, Mexico, is immensely protected and enjoys a relative seclusion from the outside world. It can only be accessed by boat, there are few phone lines, the internet does not exist, and the locals rely on the weak cell phone signal and a few radios to stay connected. According to regulations, the entire beachside is built mostly out of palm trees and adobe (a mix of mud and straw). Only the local residences can be built out of brick and this only twenty meters inland from the sea. No hotels, no resorts, only the restaurant row, fifty meters of restaurants set up by the locals providing fresh seafood, drinks and accommodations for the travelers.

We stayed in Don Carlos’ comfortable bungalows and spent most of our time walking around the beach, which stretches for over 10 miles and on to another bay. The town, including Restaurant Row, is only about a mile long. The rest is just miles of unspoiled, virgin beaches in Mexico waiting for someone to pitch a tent. Coconuts, bananas and papayas can practically be picked off the ground. The sea teems with rare sights: humpback whales can be seen migrating near the coast between November and February, dolphins can easily be spotted throughout the year, and you can even see schools of manta rays flying out of the water. But the real riches of Chacahua lay in its lagoons, which host three different species of mangrove, a wide variety of birds and reptiles, and are thick with fish and shrimp that only the local fishermen have access to, although line fishing is permitted in Chacahua.

Chacahua is a conservation site for several endangered species, including the Leatherback turtle and several species of crocodiles, which are both bred in captivity but exist in the wild all throughout the reserve. We witnessed over a hundred baby leatherback turtles being released into the sea as a part of the reserve’s conservation project led by Carlos. 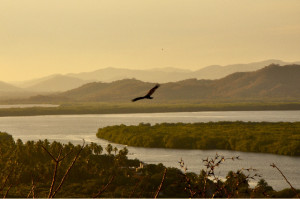 When you're in the town of Chacahua, you can go to the lighthouse, a place which provides a great panoramic view of the entire reserve and its lagoons. You can go on guided kayaking tours or explore the surrounding

extensively. And you won't want to miss a visit to the crocodile sanctuary, where these fearsome species are bred, as well as the many turtle hatcheries set up by the local conservation organizations in Chacahua, Mexico.

But really, nothing beats being taken on a kayaking tour of the lagoons at night, when the water glows, thanks to the bioluminescent plankton. Our guide, a youngster from the capital by the name of Pavel, who had settled in Chacahua, Mexico a few years back, took us paddling at night under a clear, starry night-sky, guided by flashlights and moonlight through the labyrinthine mazes of mangroves, with the added adrenalin rush of having a crocodile spring on us at any time. Actually, Pavel explained that the crocodiles roamed in a completely different zone and there was no danger of this really occurring, but the adrenalin rush was real.

We barely saw any other travelers while we were in Chacahua. The Easter and summer holidays are the high season in Chacahua, which remains peaceful even though you might find quite a few (usually environmentally conscious) travelers in the guesthouses of Restaurant Row but, having arrived at the end of February, our stay was almost exclusively in company of the locals. Carlos invited us to take part in various preservation activities, including caring for the turtle eggs and eventually releasing the turtles into the wild. His wife, Martha, provided fabulous homemade cooking for us all throughout the stay for prices that, looking back on it, seem far more than just fair.

The truth is, our trip was initially planned for three days, but we ended up staying for almost a week, and we could have remained there indefinitely had not other obligations forced us back to civilization.

Well worth the trip for thrill seekers and nature lovers, if you ask me.

is found in the south-eastern state of Oaxaca, a cultural treasure in 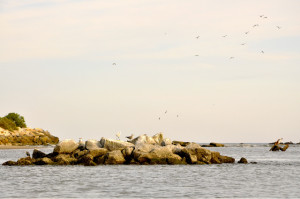 On the way from Mexico City to Puerto Escondido, you might choose to stop by the city of Oaxaca, a colonial beauty, or the magical town of San Jose del Pacifico, perched in the heights of the Southern Sierra Madre.

To get to Chacahua, Mexico,, take a bus or plane from Mexico City TAPO bus station to Puerto Escondido, then a colectivo from Puerto Escondido to the town of Rio Grande. Another colectivo takes one from Rio Grande to the embankment of Zapotalito. The last boat ride lands you inside the reserve, and the last bus ride takes you all the way to the town.

Ask for Don Carlos Contreras for accommodations, or feel free to look around the Restaurant Row and its surroundings for a place to stay.

Ask for Pavel for the kayaking tours. In a really small town like this, everyone knows each other.

Accommodations run approximately 4-5 dollars per night per person, and great seafood is servedonn Restaurant Row for as little as 6 dollars. Speak directly to the fishermen to get even better deals on seafood.

Lemons and More, the Amalfi Coast